The board of directors of Copperstone has, based on the authorisation which was obtained at the extraordinary general meeting on 29 September 2020, resolved on a directed issue with deviation from the existing shareholders’ preferential rights of up to 128,255,140 shares to a subscription price of SEK 0.75 per share (the “Directed Issue”). The Company will thereby receive proceeds of approximately SEK 96 million before transaction costs of approximately SEK 1.5 million. The subscription price in the Directed Issue amounted to SEK 0.75 per share, corresponding to a discount of approximately 9.6 per cent in relation to the volume weighted average price on Nasdaq First North Growth Market during the last 20 trading days up to and including 9 April 2021. The subscription price was determined after negotiations with several professional investors.

Jörgen Olsson, Chairman of the board of directors, comments:
“The increased interest in Copperstone and in the reopening of the Viscaria mine among well-known investors is important for future financing and means that we can now accelerate the project further. We see increased potential from previously completed mining in the area and intend to explore possible values of, for example, sand reservoirs and landfills further.”

Received proceeds from the Directed Issue together with existing cash is intended to be used to the following:

The board of directors assesses that the subscription price in the Directed Issue fairly reflects the current market conditions and demands. Furthermore, the board of directors has resolved to deviate from the shareholders’ preferential rights mainly in order to in a time and cost-effective manner procure capital and diversify the ownership base.

This press release includes insider information which Copperstone Resources AB (publ) is obliged to make public pursuant to the EU Market Abuse Regulation. This information was submitted for publication, through the agency of the contact persons set out above, 9 April 2021 at 20:30 CET.

About Copperstone
Copperstone Resources AB is an exploration company that was founded in 2006. In 2019, the Viscaria deposit in Kiruna, Sweden, was acquired and thus the company’s strategy was revised. The goal is to become a modern and responsibly producing mining company through the reopening of the Viscaria mine. The deposit’s high copper grade and geographical location give good conditions to become a key supplier of quality and responsibly produced copper to customers who drive the increasing electrification of society globally. In addition to the Viscaria mine, Copperstone holds a number of other exploitation concessions and exploration permits in Arvidsjaur (Eva, Svartliden, Granliden) and Smedjebacken (Tvistbogruvan), all in Sweden. The company’s shares are traded on the Nasdaq First North Growth Market (ticker COPP B). Augment Partners is the company’s Certified Adviser, info@augment.se, +46 8-604 22 55. 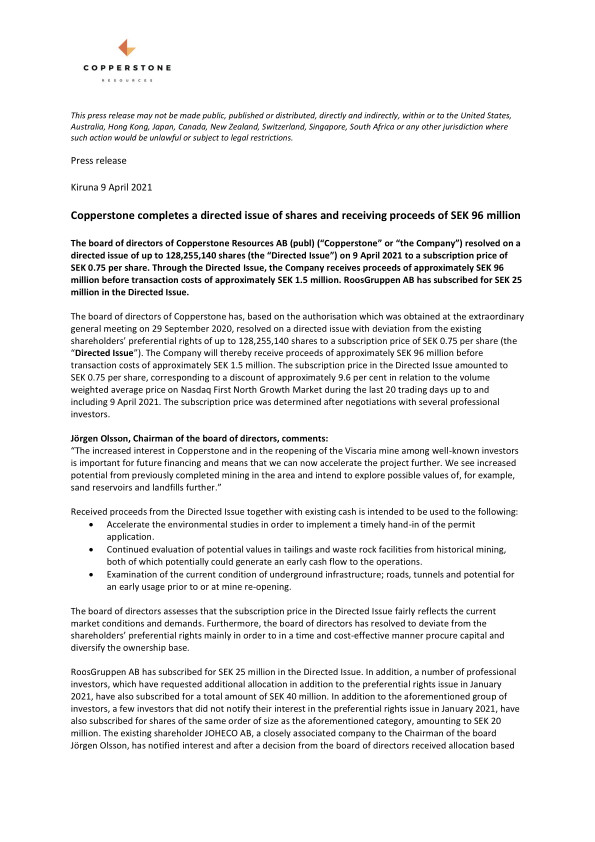