The board of directors of Copperstone Resources AB (publ) (“Copperstone” or the “Company”) has decided to investigate the conditions for carrying out a directed issue of approximately SEK 130 million (the ”Directed Share Issue”).

Copperstone announces the intention of carrying out a directed issue of shares of approximately SEK 130 million, directed at institutional and qualified investors in Sweden and internationally, with deviation from existing shareholders’ preferential rights and in accordance with the issue authorisation granted by the annual general meeting on 19 May 2021. Copperstone has appointed Arctic Securities AS, filial Sverige to investigate the conditions for carrying out the Directed Share Issue which will be commenced immediately.

The subscription price for the new shares in the Directed Share Issue is to be determined through an accelerated book building procedure, which will begin immediately after the announcement of this press release. The board of directors of Copperstone has considered the possibilities of raising capital through a rights issue, but believes that the Company should take advantage of the opportunity to raise capital in a time, cost- and resource-efficient way now, prior to the forthcoming submission of the Company's environmental application in March 2022. Since the environmental application and the work that follows is resource-intensive, the Company sees a directed issue of shares at this time as a well-chosen opportunity and approach to strengthen its starting point for future dialogues with stakeholders and collaborative partners in the coming year. Furthermore, the board of directors considers it positive to diversify the Company's ownership base. The overall assessment of the board of directors is that the reasons for carrying out the Directed Share Issue in this way outweigh the reasons that justify the main rule, to issue shares with preferential rights for existing shareholders, and that a new share issue deviating from the shareholders 'preferential rights is thus in the Company's and all shareholders' interests.

The Directed Share Issue requires that the board of directors of Copperstone, after the investigation regarding the conditions for the Directed Share Issue, resolves to issue new shares, which, alongside pricing and allocation, is expected to occur prior to the commencement of trading on Nasdaq First North Growth Market on 1 February 2022. The board of directors can at any time choose to cancel the book building procedure, close earlier or later (taking into account the time frame that follows from the Company's publication of the year-end report on 4 March 2022) and refrain from executing the Directed Share Issue, in part or in full.

The Company intends to use the net proceeds from the Directed Share Issue to further accelerate investments for an expedient re-opening process of the Viscaria mine in Kiruna. A prioritized investment area will be continued core drillings in order to secure and increase the mineral resources.

This press release includes inside information which Copperstone Resources AB (publ) is obliged to make public pursuant to the EU Market Abuse Regulation. This information was submitted for publication, through the agency of the contact persons set out above, 31 January 2022 at 19:30 CET.

About Copperstone
Copperstone Resources AB is a company now scaling up to become a modern and responsibly producing mining company through the reopening of the Viscaria mine in Kiruna, Sweden. The deposit’s high copper grade assessed mineral resources, geographical location and growing team of experts provides good opportunities to become a key supplier of quality and responsibly produced copper – a metal that plays a critical role in Sweden’s and Europe’s climate change towards an electrified society. In addition to the Viscaria mine, Copperstone holds a number of other exploitation concessions and exploration permits in Arvidsjaur (Eva, Svartliden, Granliden) and Smedjebacken (Tvistbogruvan), all in Sweden. The parent company’s shares are traded on the Nasdaq First North Growth Market (ticker COPP B). Augment Partners is the company’s Certified Adviser, info@augment.se, +46 8 604 22 55. 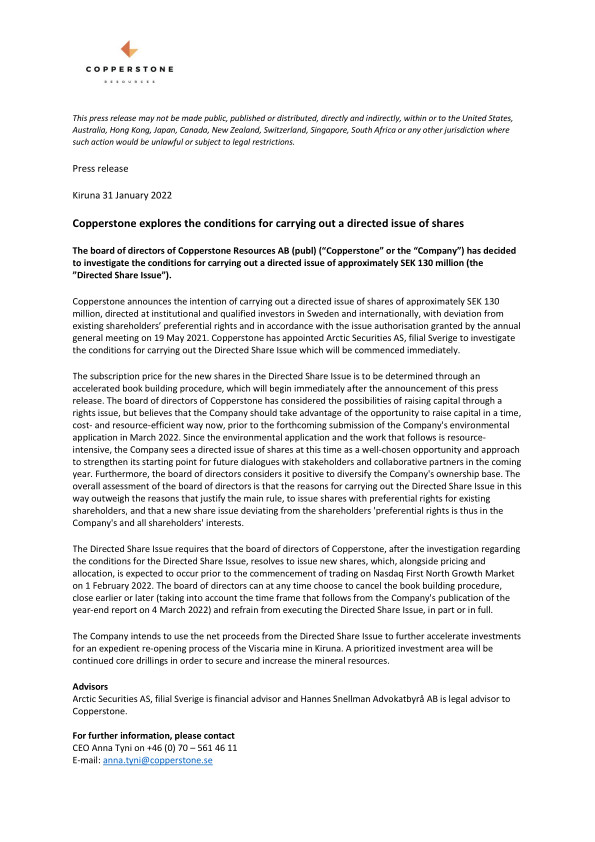