This press release may not be made public, published or distributed, directly or indirectly, within or to the United States, Australia, Hong Kong, Japan, Canada, New Zealand, Switzerland, Singapore, South Africa or any other jurisdiction where such action would be unlawful or subject to legal restrictions.

The board of directors of Copperstone Resources AB (publ) (“Copperstone” or the “Company”) has decided to explore the conditions for carrying out a directed issue of shares of more than SEK 200 million (the ”Directed Share Issue”). Thomas von Koch and Jan Ståhlberg wish to subscribe for shares corresponding to a total of SEK 150 million to market value, as well as wish to appoint a member to the board of directors.

Copperstone announces the intention to carry out a directed issue of shares of more than SEK 200 million directed to qualified investors, with deviation from existing shareholders’ preferential rights and in accordance with the issue authorisation granted by the annual general meeting on 18 May 2022. Thomas von Koch, who invested approximately SEK 81 million1 in March 2022, and Jan Ståhlberg, in capacity of new investor, have expressed an interest to subscribe corresponding to a total of approximately SEK 150 million to market value, and wish to appoint a member to the board of directors. Copperstone has appointed Arctic Securities AS, filial Sverige to investigate the conditions for carrying out the Directed Share Issue, which will commence immediately.

Copperstone is in an intense phase and, in accordance with previous communication, a larger procurement of capital will be made in connection with obtained environmental permit. Ahead of future procurement of capital, the Company’s board of directors consider it of immense importance to have long-term and financially strong shareholders.

In the light of this, the Company’s board of directors consider the Directed Share Issue as a means to bring in more long-term and financially strong shareholders in the Company, who are also deemed to have the financial possibility to support the Company with capital in future capitalisations. Also such owners with minor holdings today have been given the opportunity to increase their share. In order to support the board of directors’ outlook further, representatives of the Company have sounded the interest of a number of existing shareholders regarding if they would have preferred a rights issue or a directed issue of shares at this stage. An overwhelming majority held the view that a directed issue of shares was preferable, partly because of the high and presumably increasing uncertainty during the last months on both the stock market and the financing markets in general. The already critical preparations prior to the environmental permit before mine opening could be seriously damaged by unnecessary financial uncertainty in the Company during the coming quarters. The overall assessment of the board of directors is that the reasons for carrying out the Directed Share Issue in this way, and thereby, inter alia, secure Thomas von Koch’s increased, and Jan Ståhlberg’s new, commitment in the Company, strongly outweigh the reasons that justify the main rule, to issue shares with preferential rights for existing shareholders. The board thus assesses that an issue of shares deviating from the shareholders’ preferential rights is in the Company’s and all shareholders’ interest.

The subscription price for the new shares in the Directed Share Issue is intended to be determined through a so-called accelerated book building procedure to the volume-weighted average price during 20 October 2022, which amounted to a price of SEK 1.15.

The Directed Share Issue requires that the board of directors of Copperstone resolves to issue new shares, which, alongside pricing and allocation, is expected to occur prior to the commencement of trading on Nasdaq First North Growth Market on 21 October 2022. The board of directors may at any time choose to cancel, close earlier or prolong the procedure, as well as refrain from executing the Directed Share Issue, in part or in full.

The Company intends to use the net proceeds from the Directed Share Issue to accelerate further investments and core drillings before an approval of the environmental permit application, in order for the Company to be well prepared before a re-opening of the Viscaria mine in Kiruna. A prioritised investment area is core drilling in the Viscaria area, with the purpose to secure and increase the mineral assets.

For further information, please contact
Chairman of the board Jörgen Olsson on +46 (0) 703 – 420 570
E-mail: jorgen.olsson@copperstone.se

This press release includes inside information which Copperstone Resources AB (publ) is obliged to make public pursuant to the EU Market Abuse Regulation. This information was submitted for publication, through the agency of the contact person set out above, on 20 October 2022 at 18:45 CEST.

About Copperstone
Copperstone Resources AB is a company now scaling up to become a modern and responsibly producing mining company through the reopening of the Viscaria mine in Kiruna, Sweden. The deposit’s high copper grade assessed mineral resources, geographical location and growing team of experts provides good opportunities to become a key supplier of quality and responsibly produced copper – a metal that plays a critical role in Sweden’s and Europe’s climate change towards an electrified society. In addition to the Viscaria mine, Copperstone holds a number of other exploitation concessions and exploration permits in Arvidsjaur (Eva, Svartliden, Granliden) and Smedjebacken (Tvistbogruvan), all in Sweden. The parent company’s shares are traded on the Nasdaq First North Growth Market (ticker COPP B). Augment Partners is the company’s Certified Adviser, info@augment.se, +46 8 604 22 55.

1 Together with his business partner Christian Kinch, corresponding to approximately 71 million shares to the current market value at that time of SEK 1.14 per share, or in total 5.4 percent of the Company’s capital, by way of a directed issue of shares. 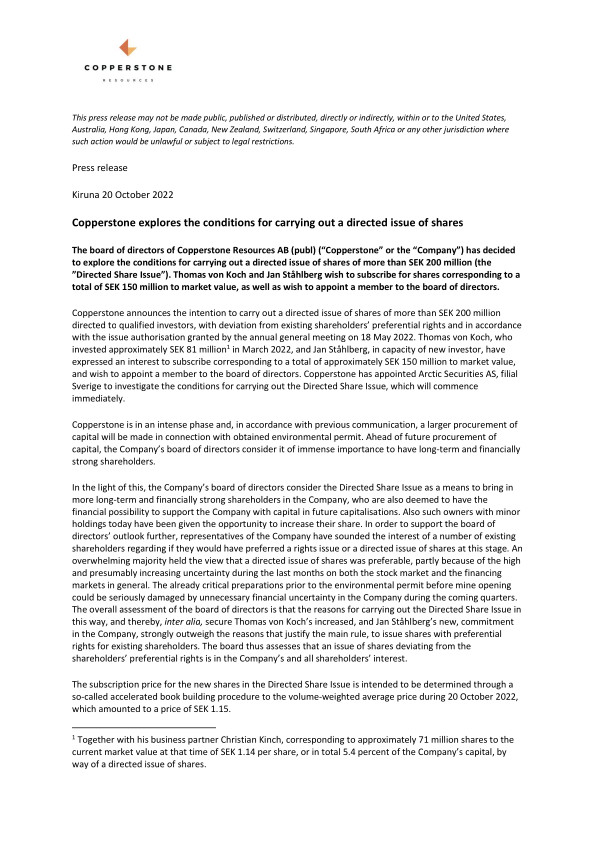