Copperstone explores the conditions for carrying out a directed share issue

Danderyd May 18, 2020 This press release may not be released, published or distributed, directly or indirectly, in or into the United States, Australia, Hong Kong, Japan, Canada, New Zealand, Switzerland, Singapore, South Africa or any other jurisdiction where such measure would be illegal or subject to legal restrictions. Copperstone Resources AB (publ) (“Copperstone” or…

This press release may not be released, published or distributed, directly or indirectly, in or into the United States, Australia, Hong Kong, Japan, Canada, New Zealand, Switzerland, Singapore, South Africa or any other jurisdiction where such measure would be illegal or subject to legal restrictions.

Copperstone Resources AB (publ) (“Copperstone” or “the Company”) has engaged ABG Sundal Collier to explore the conditions for carrying out at a directed share issue corresponding to a value of approximately SEK 20 million based on an accelerated bookbuilding process.

Copperstone announces its intention to carry out a directed new share issue of B-shares corresponding to a value of approximately SEK 20 million, with deviation from existing shareholders’ preferential rights, based on the authorisation granted by the annual general meeting held on 14 May 2019 (the ”Directed Share Issue”). Copperstone has engaged ABG Sundal Collier to investigate the possibilities to conduct the Directed Share Issue.

The subscription price for the new shares in the Directed Share Issue is to be determined through an accelerated bookbuilding procedure, which will begin no earlier than 18:15 today, May 18, 2020, and end before the commencement of trading on Nasdaq First North Growth Market on May 19, 2020. The bookbuilding procedure may, at the discretion of the Company or ABG Sundal Collier, close earlier or later and may be cancelled at any time.

The Company intends to use the proceeds from the Directed Share Issue for:

The Directed Share Issue is subject to a resolution by the board of directors of Copperstone, pursuant to the issue authorization given by the Annual General Meeting on 14 May, 2019 to issue new B-shares, following the close of the bookbuilding.

This press release contains insider information which Copperstone Resources AB (publ) is obliged to publish according to the EU market abuse regulation (MAR). The information was delivered by the above-mentioned contact for publishing 18 May, 2020 at 18.15  CEST.

This announcement is not a prospectus for the purposes of Regulation (EU) 2017/1129 (the “Prospectus Regulation“) and has not been approved by any regulatory authority in any jurisdiction. Copperstone has not authorized any offer to the public of shares or other securities in any member state of the EEA and no prospectus has been or will be prepared in connection with the Directed New Share Issue. In any EEA Member State, this communication is only addressed to and is directed at qualified investors and corresponding investors in that Member State within the meaning of the Prospectus Regulation. This press release and the information the press release contains may not be distributed in or into the United States. This press release does not constitute an offer to acquire securities in the United States. Securities that are mentioned here have not been registered and will not be registered under the United States Securities Act of 1933, as amended (the “Securities Act”), and may not be offered or sold in the United States without being registered, subject to an applicable exemption from, or in a transaction not subject to, the registration requirements under the Securities Act. There will be no public offering of such securities in the United States.

About Copperstone
Copperstone is a public company trading as COPP B on Nasdaq First North Growth Market in Stockholm, Sweden. The Certified Adviser is Augment Partners AB, info@augment.se, +46 8 505 65 172. The Company is focused on base and precious metal exploration in the vicinity of the internationally recognized mining districts of Kiruna and the Skellefte-field in northern Sweden. In addition, the Company also owns an exploitation concession in the Bergslagen mining region, in central Sweden. 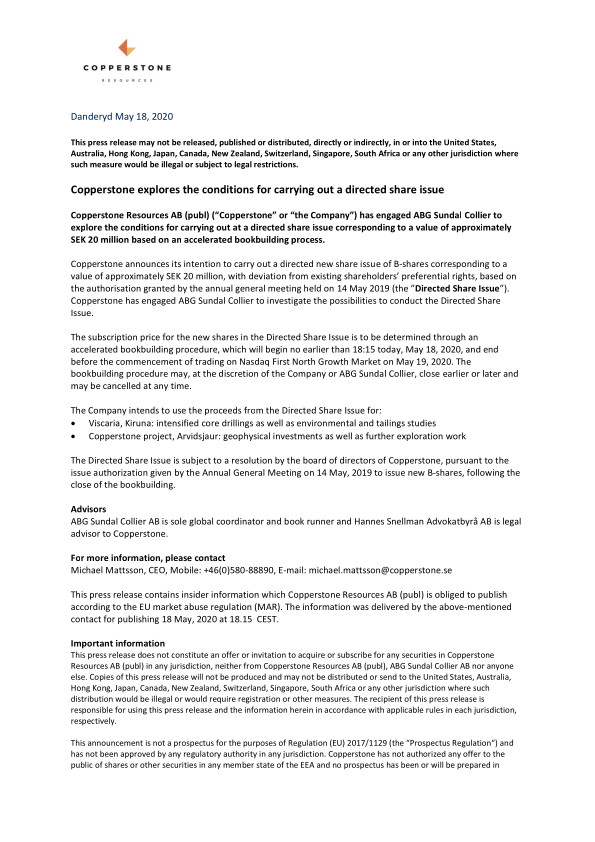