Copperstone Resources AB (publ) (“Copperstone” or the “Company”) has today agreed on an addendum (the “Addendum”) with its largest shareholder, Sunstone Metals Ltd (“Sunstone”), regarding the acquisition of Avalon Minerals Viscaria AB (“Viscaria”, the subsidiary with the Viscaria mining assets). The Addendum is in key parts conditional upon EGM approval which will be on the agenda on the rights issue EGM the Company is to summon. Instead of the initially agreed SEK 20 million in cash and 46 million new shares as the additional purchase price in the event of environmental permit (jointly the "APP") obligation potentially owed to Sunstone, the Addendum is providing for the prepayment of the APP, in a total amount in cash of SEK 26 million. Out of this sum, a down payment of SEK 4.8 million will be made before the EGM. The prepayment is to be funded through the rights issue amounting to approximately SEK 160 million (the “Rights Issue”) announced today, see further Copperstone's separate press release today announcing this issue.

The acquisition agreement (the "Viscaria Agreement") was entered into in November 2018, and was completed in March 2019, where Copperstone issued 160 million shares (then representing approximately 25 percent of all shares) and whereby Sunstone became Copperstone's largest shareholder. The APP that Copperstone potentially has to pay to Sunstone was agreed with the condition that the Viscaria project will be granted an environmental permit for the intended mining operations, and consisting of a cash portion of SEK 20 million (if the permit is granted within seven years) and an equity portion of 46 million new shares (without limitation in time for the permit). The equity portion is furthermore subject to recalculation of the number of new shares in case of intervening splits, rights issues or other relevant corporate events (anti-dilution protection), and could potentially become payable in cash such as if future general meetings fail to authorize the agreed issuance of such new shares.

The Addendum for the prepayment of the APP has now been negotiated and entered into by Copperstone's Board of Directors, without Mr Malcolm Norris' participation (Mr Norris also being Sunstone's CEO). With reference to the general statement from the Swedish Securities Council (AMN 2019:25) concerning related-party transactions, the Addendum will also be submitted to the EGM now to be held in order to approve the above-mentioned rights issue. Out of the agreed cash prepayment of SEK 26 million, a down payment amounting of SEK 4.8 million will be paid before the EGM, which is to be retained if the APP prepayment is cancelled for whatever reason. The down payment will immediately result in an irreversible reduction of the potential cash owing of SEK 20 million to SEK 11.4 million. The irreversible down payment structure has been agreed for risk management purposes, the transaction value of which is below the threshold pursuant to the abovementioned AMN statement. The remainder of the prepayment amounting to SEK 21.2 million, assuming EGM approval, will become payable after completion of the rights issue.

The potential APP obligation (cash and shares) corresponds to a long-term liability according to IFRS in Copperstone's balance sheet as of 30 September 2020 of approximately SEK 46 million, which accounting assessment is inter alia taking the uncertainty of obtaining the environmental permit into account. The prepayment transaction is expected to result in a strengthening of the Company's equity of approximately SEK 20 million. As a result of the transaction, Sunstone will have no further claims on Copperstone as the Viscaria acquisition will be paid in full.

The Board of Directors is of the view that the now negotiated prepayment of the APP will be clearly beneficial to the Company and its shareholders, both in the short term and in the longer term. The APP prepayment in itself will improve Copperstone's solvency and financial risk picture significantly both upon the down payment and upon the remaining APP prepayment. The APP prepayment and the ensuing abolishment of a substantial potential dilution is deemed to facilitate a successful outcome of not only the now initiated rights issue, but in particular of any necessary future financing of the development of the Viscaria project. The main uncertainty for the APP becoming payable is the environmental permit, where a strong financial situation is deemed to improve Copperstone's favourable position further.

The Board of Directors can thus leave a well-founded recommendation Copperstone's shareholders, besides Sunstone, to vote for the main, remaining part of the prepayment that is conditioned of the approval of the EGM.

For approval at the EGM regarding the remaining prepayment of MSEK 21.2 cash a simple majority is required, without taking Sunstone’s shareholding into account. This decision will be made separately from the decision regarding the rights issue at the EGM. The agreement regarding prepayment in this part also presupposes that the rights issue is approved and carried out within reasonable time, but not that it will be fully subscribed for.

Additional information regarding the agreed APP prepayment, its relation to the rights issue and the EGM approval process will be presented in the notice to the EGM which is to be made public on a later date, as well as in the ensuing documentation with the Board of Director's complete proposal to be provided pursuant to AMN 2019:25 ahead of the EGM.

This press release contains inside information that Copperstone Resources AB (publ) is obliged to make public in accordance with the EU Market Abuse Regulation (MAR). This information was submitted through the agency of the contact person set out above for publication on 20 November 2020 at 08:20 CET. 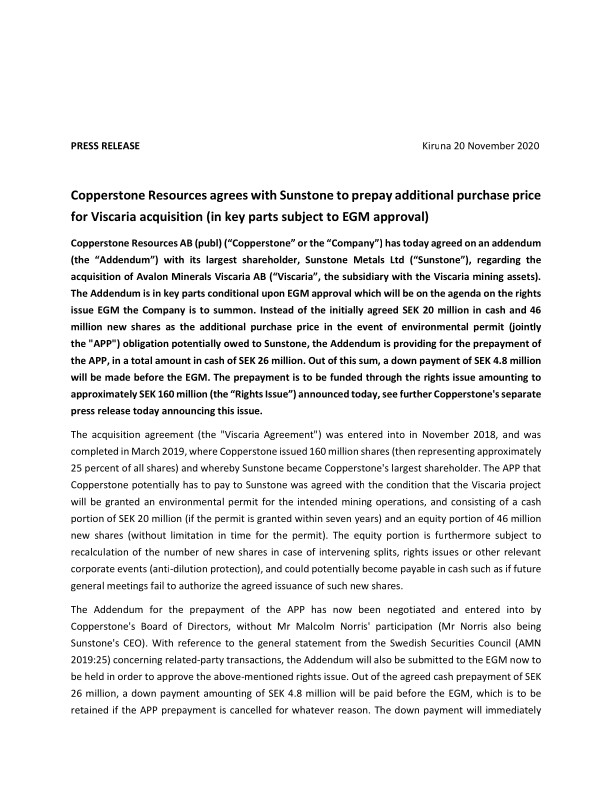