SIGNIFICANT EVENTS DURING THE PERIOD

SIGNIFICANT EVENTS AFTER THE PERIOD

“Our mineral resource upgrade is expected to secure another 3-4 years of future production from the Viscaria mine. In addition, we have submitted additions to our environmental permit application and the work with partial investigations has contributed to further insights before the reopening of the Viscaria mine.” CEO Anna Tyni,


CEO COMMENTS
The environmental permit application for reopening the Viscaria mine remained Copperstone’s focus in the third quarter. On March 30, we submitted an application for an environmental permit to the Land and Environment Court and at the end of June we received feedback from the court and a number of consultation bodies regarding additions to the application, which is a completely normal phase and means that our application will be as complete as possible. We worked our way through these items over the summer and submitted all additional information on October 7. We continue to have a productive dialogue and communication with the relevant authorities. The investigations performed in the summer have also provided additional insight and innovative solutions ahead of the reopening. When the court deems our application to be complete it will announce a public notice, and we aim this will happen before the end of the year, but the exact timing is out of our control. Our timetable, which involves securing an environmental permit by mid 2023, is bold yet realistic and feasible.

A bridge to secure future development
The quarter has contained several important work streams. The newly built bridge was installed September 11, a bridge that will serve as the new entrance to the Viscaria site. The bridge spans over the iron ore railway (Malmbanan) and will facilitate our continued daily work, our exploration activities. The inauguration ceremony took place on November 11, and from December onwards, the Viscariapassagen bridge will be fully open to traffic. The water purification pilot project is proceeding according to plan and the water pumping begun in November.

Resources upgrade
We are accelerating the pace of our core drilling at Viscaria. Our calculations indicate that, with the last two years of core drilling, we have secured the future production of the Viscaria mine with another 3–4 years. More specifically, the measured and measured plus indicated mineral resources in the A/B/D zones have increased by as much as 43 percent and 23 percent, respectively. The mineral resource upgrade forms the foundation of the feasibility study that forms the basis of the final mine planning and future bank financing. Copperstone has now completed upwards of 45,000 meters of core drilling since the acquisition of Viscaria in 2019.

Team strengthened with new CEO
We have also strengthened the organization considerably during the quarter. Henrik Ager will take office as the new CEO and Group President by the end of the year. Henrik Ager joins us from Sandvik where he was Head of the Sandvik Mining and Rock Solutions business area. With Henrik onboard, we are adding industry experience to the team that is needed in the company’s upcoming phase and financing if an environmental permit is granted. I will be able to focus wholeheartedly on restarting Viscaria as the CEO of the subsidiary Copperstone Viscaria AB and thus have a central role in the Group’s management team and operating activities. We have also strengthened our team with the addition of Environmental Manager Peter Wihlborg, who has worked closely together with our Sustainability Manager Anders Lundkvist on the environmental permit application. He brings additional experience and expertise to the company.

Limited impact from global turbulence and strengthened finances
Another sign of strength is that, despite the difficult financing climate, we further strengthened our finances after the end of the quarter by raising MSEK 235 through a directed share issue to, among others, Thomas von Koch, Jan Ståhlberg and RoosGruppen AB. As a result, Thomas von Koch has become the largest owner of the Company. Ahead of future financing and other activities, it is a huge advantage to have a qualified, long-term investor engaged in the Company who has held prominent roles in the Swedish business world for decades.
The increased turbulence in the world during the autumn has had a limited impact on Copperstone and our operations to date. The long-term gap in demand for copper in the market, that has arisen as society is becoming more electrified, has not changed and in fact the trend toward more locally produced minerals, shorter transport distances and a more self-sufficient Europe has been amplified. This, together with the continued positive response to the Viscaria project in Kiruna, provides us with significant energy for the upcoming winter

THE COMPANY IN BRIEF
Copperstone Resources AB is a company now scaling up to become a modern mining company with responsible production through the reopening of the Viscaria mine in Kiruna, Sweden. The deposit’s high copper grade, mineral resources, geographical location and growing team of experts provides good prerequisites for Copperstone to become a key supplier of high-quality and responsibly produced copper – a metal that plays a critical role in Sweden’s and Europe’s climate transition toward an electrified society. In addition to the Viscaria mine, Copperstone holds a number of other exploitation concessions and exploration permits in Arvidsjaur (Eva, Svartliden, Granliden) and Smedjebacken (Tvistbo mine), all in Sweden. The Parent Company’s shares are traded on the Nasdaq First North Growth Market (ticker COPP B). Augment Partners is the company’s certified adviser, info@augment.se, +46 8 604 22 55. 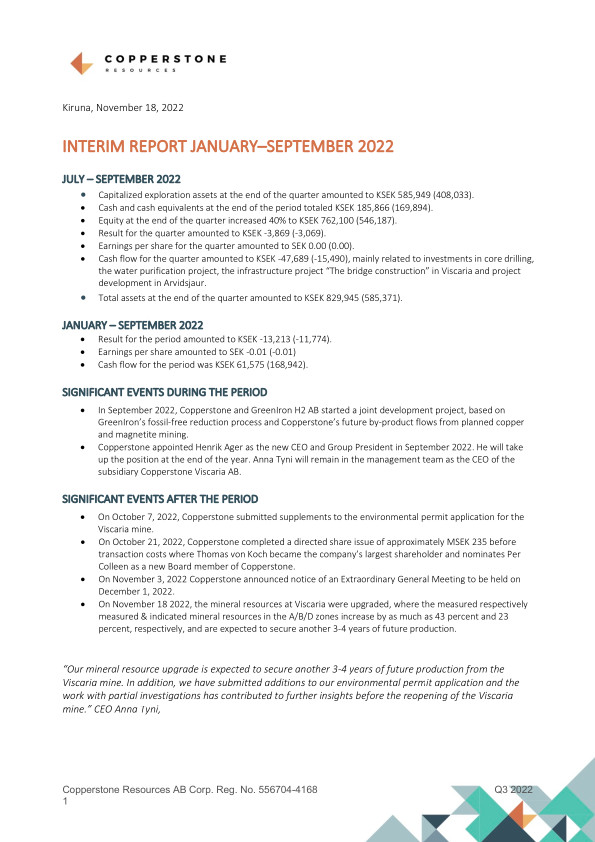