SIGNIFICANT EVENTS DURING THE PERIOD

SIGNIFICANT EVENTS AFTER THE PERIOD

The high pace in Copperstone’s journey to reopen the Viscaria mine, continued during the third quarter. We have gained several new colleagues to the head office in Kiruna, and we have had continuous dialogue and collaboration with various stakeholders in the local area which has been very inspiring. The overall positive attitude from stakeholders to the project gives us energy and we are now working hard and focused on our environmental permit, which we aim to submit to the Land and Environment Court in March 2022.

At the end of September, we had many eminent investors on a site visit in Kiruna – a successful day where we delved into several of the factors that make the Viscaria mine completely unique, with exceptionally good conditions. On the same day, we also announced our plans to make the project significantly larger – with a potential increased yearly milled run-rate and an increased production capacity in our planned concentrator. This is based on positive indications from our core drilling and the general situation in the copper market.

Our plans have been scaled up

The latest drilling campaign in Viscaria has shown positive results from the southern deposit of the B-zone, where only limited mineral resources have previously been secured. We now anticiapte that the exploration target for Viscaria will reach 89-109 Mton copper-bearing rock in the medium term (3-5 years), which at a copper grade of 1.11-1.13% corresponds to 1-1.2 Mton copper (currently 727,000 tonnes). We are planning and now modeling for a yearly milled run-rate production of 3 Mton, with an opportunity to increase capacity further to 5 Mton. This can be compared with previous assumptions of 2 Mton. The estimated future potential annual net profit after the increase is thus estimated to rise from SEK 400 million to approximately SEK 850 million. At the same time, the total investment need is expected to increase from SEK 1.5 billion to approximately SEK 3-4 billion. Of course, this presupposes a successful conversion of mineral resources into reserves, an approved environmental permit and financing.

It is very gratifying that we are gradually making progress in the reopening of the Viscaria mine and that the combined team efforts and the promising market conditions have enabled a better and more comprehensive project than we previously planned for.

Our growing team of experts is constantly finding new solutions that provide a more optimized and more sustainable production. During the autumn, we have thus taken clear steps in our vision to provide sustainably produced copper to enable a zero-carbon future. To be able to do this in a systematic way, we have carried out a thorough mapping of greenhouse gas emissions in each component and each step of production. Based on this analysis, we are convinced that we can already from start of production be one of the best copper mines in the world when it comes to low CO2-emissions.

We have also begun work on identifying which additional areas of sustainability that are important to us to understand in future strategy work and goal formulations. The work will be presented in the coming annual report.

Copper has a central role in Sweden's and Europe's climate adaptation. It is a key component for all forms of electricity transmission. The sharp rise in copper prices over the past year indicates that the future supply of copper will fall below the demand. With that in mind, the reopening of Viscaria is important from a global perspective and there is, in my opinion, no better place than Sweden and specifically in the Viscaria brownfield area, to open a mine in. We have a strong environmental legislation here, which means that the mines that opens here will be among the best and most sustainable in the world. We who work at Copperstone are Kiruna residents and we are all strongly driven by making sure that we open a mine with as minimal environmental impact as possible. We'll make sure of that.

ABOUT COPPERSTONE RESOURCES
Copperstone Resources AB is a company now scaling up to become a modern and responsibly producing mining company through the reopening of the Viscaria mine in Kiruna, Sweden. The deposit’s high copper grade assessed mineral resources, geographical location and growing team of experts provides good opportunities to become a key supplier of quality and responsibly produced copper – a metal that plays a critical role in Sweden's and Europe's climate change towards an electrified society. In addition to the Viscaria mine, Copperstone holds a number of other exploitation concessions and exploration permits in Arvidsjaur (Eva, Svartliden, Granliden) and Smedjebacken (Tvistbogruvan), all in Sweden. The parent company’s shares are traded on the Nasdaq First North Growth Market (ticker COPP B). Augment Partners is the company's Certified Adviser, info@augment.se, +46 8 604 22 55. 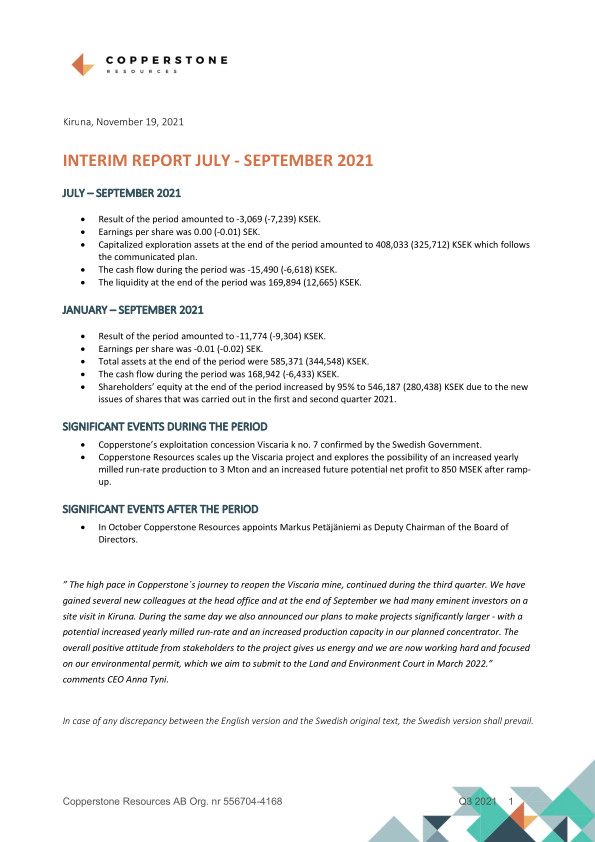