In early summer, Copperstone Resources will invite the public to consultation meetings as part of the environmental permit process for the planned restart of the Viscaria copper mine in Kiruna. The goal is to initiate a good dialogue with all stakeholders.

“After a couple of years of preparation and environmental feasibility studies, it is now time for the first public consultation in Copperstone's application process. We want to create an open and good dialogue with all parties and gather valuable knowledge and views from concerned Sami communities about reindeer husbandry and Sami culture, as well as information from and views of other stakeholders, organisations, the public and the authorities. We urge everyone to participate in this democratic process and contribute to creating a good basis for the design of the project and for the decision that will finally be made by the Land and Environment Court,” says Anders Lundkvist, Head of Environment and Sustainability at Copperstone Resources.

“We aim to involve stakeholders and interested parties from the start to create a dialogue early in the process. Copperstone is a Swedish listed company with headquarters and personnel in Kiruna and we will be available for an ongoing dialogue,” Anders Lundkvist continues.

It is now 25 years since the Viscaria copper mine was last in operation, then under the ownership of Outokumpu Oy. The operation, to which the environmental permit application refers to, will mainly be conducted on already exploited land, i.e. a brownfield project. The environmental footprint will thus be relatively low, while the project offers major environmental and societal benefits.

“Copper has a central role in Sweden’s and Europe's climate transition. It is a key component for all forms of electric transmission and is used in large quantities in electric motors as well as in wind turbines and systems for solar heating. At present, Europe imports most of its copper from other continents, and we see the opportunity to fill part of that need with copper mined in Sweden, where we are at the forefront of technological innovations that promote efficient and environmentally friendly mining. Our ambition is to deliver copper that is produced with the highest environmental consideration and with a focus on sustainability. There is a great environmental benefit in resuming operations at Viscaria, where we have the opportunity to mine high-grade copper with sustainable processes in an existing mining area directly adjacent to the world's most climate-smart freight railway,” says Anders Lundkvist.

“Our commitment to sustainability runs as a common thread through the planned operations. Among other things, we plan to use methods for landfilling that allow the deposits to blend with the landscape in

By clear and transparent information about the project, Copperstone Resources aim to create conditions for a constructive dialogue about Viscaria in order to involve the public and provide opportunity to influence how the planned activities can be designed. In addition to a first major consultation meeting, which may take place digitally due to local corona restrictions, the company will offer invitations to a number of consultations, involving representatives of Sami communities and other stakeholders, and also conduct surveys, so that everyone has the opportunity to be heard.

“Those of us who are involved in the project are from Kiruna and Norrbotten and we are happy and proud to be the first listed company in Kiruna and the first mining company that is headquartered in the town. Viscaria has the potential to create around 250 jobs, our goal is for the operation to coexist with the interests that are already present in the area, such as the reindeer husbandry and the recreational activities around Ädnamvaara/Eatnamvárri,” says Site Manager Anna Tyni.

“The planned operations affect the beginning of the existing trail to Ädnamvaara, which will need a new route a little further to the northwest. There is then an opportunity to improve the trail to this popular excursion spot,” concludes Anna Tyni.

In addition, an invitation to the consultation meeting will be made via advertising in the local press and digitally, so that the public and organisations have opportunity to receive information and submit their comments.

Facts about the project plans for the Viscaria mine

Copperstone Resources AB is a mineral exploration company formed in 2006. During 2019, the Company acquired Viscaria deposit in Kiruna and accordingly, the Company’s strategy was revised. The goal is to become a modern and responsibly producing mining company through the reopening of the Viscaria mine. The deposit’s high level of copper and the geographical location provide for good conditions to become a key supplier of qualitative and responsibly produced copper to customers who are driving the global change towards an electrified society. In addition to the Viscaria mine, Copperstone have several Exploitation Concessions and Exploration Permits in Arvidsjaur (Eva, Svartliden, Granliden) and Smedjebacken (Tvistbogruvan), all of which are located in Sweden. The Company’s shares are subject trading on Nasdaq First North Growth Market (ticker COPP B). The Certified Adviser is Augment Partners AB, info@augment.se, +46 8-604 22 55. 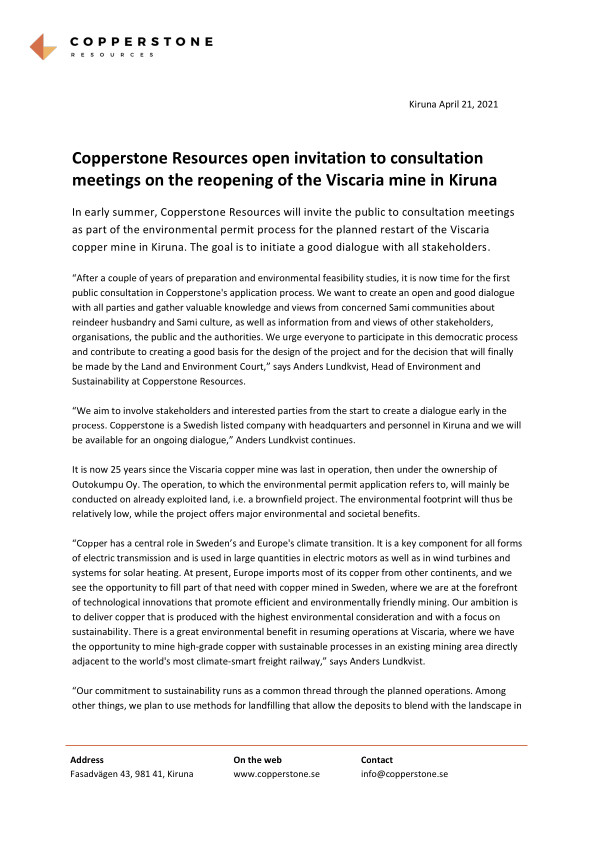