NOT FOR RELEASE, DISTRIBUTION OR PUBLICATION, DIRECTLY OR INDIRECTLY, IN THE UNITED STATES, AUSTRALIA, JAPAN, CANADA, SOUTH AFRICA, NEW ZEALAND, SINGAPORE HONG KONG, SWITZERLAND OR ANY OTHER JURISDICTION WHERE RELEASE, DISTRIBUTION OR PUBLICATION OF THIS PRESS RELEASE WOULD BE ILLEGAL OR REQUIRE FURTHER REGISTRATION OR OTHER MEASURES. THIS PRESS RELEASE DOES NOT CONSTITUTE AN OFFER OF ANY SECURITIES OF COPPERSTONE RESOURCES AB (PUBL). PLEASE REFER TO THE SECTION “IMPORTANT INFORMATION” BELOW.

“We are happy and proud of the trust we have received from existing and new shareholders. It gives us the opportunities to fully implement our project and business plan for primarily the reopening of the Viscaria mine, which in the near future means focus on environmental permit work, expansion and further definition of our mineral resources, organizational expansion and continued dialogue with local stakeholders", says Jörgen Olsson, Executive Chairman of the Board of Copperstone Resources AB (publ) in a comment.

Copperstone intends to use the proceeds from the issue to secure the Company's working capital needs for the next 18-24 months. Furthermore, in connection with the receival of the proceeds from the issue, the Company will prepay the additional purchase price to Sunstone through a cash payment of MSEK 26, which will result in the Group's long-term debt being written down by MSEK 46. As a result of the transaction, Sunstone will have no further claims on Copperstone as the Viscaria acquisition will be paid in full. The company now only has Norrlandsfonden as a long-term debt in the form of convertible debentures with a nominal of MSEK 9.1 at 5 percent annual interest.

This press release contains inside information that Copperstone Resources AB (publ) is obliged to make public in accordance with the EU Market Abuse Regulation (MAR). This information was submitted through the agency of the contact person set out above for publication on 28 January 2021 at 15:57 CET.

This press release is not a prospectus in the meaning of Regulation (EU) 2017/1129 (the “Prospectus Regulation”) and has not been approved by any regulatory authority in any jurisdiction. A prospectus, corresponding to an EU Growth Prospectus, have been drawn up by the Company and published on the Company’s website. 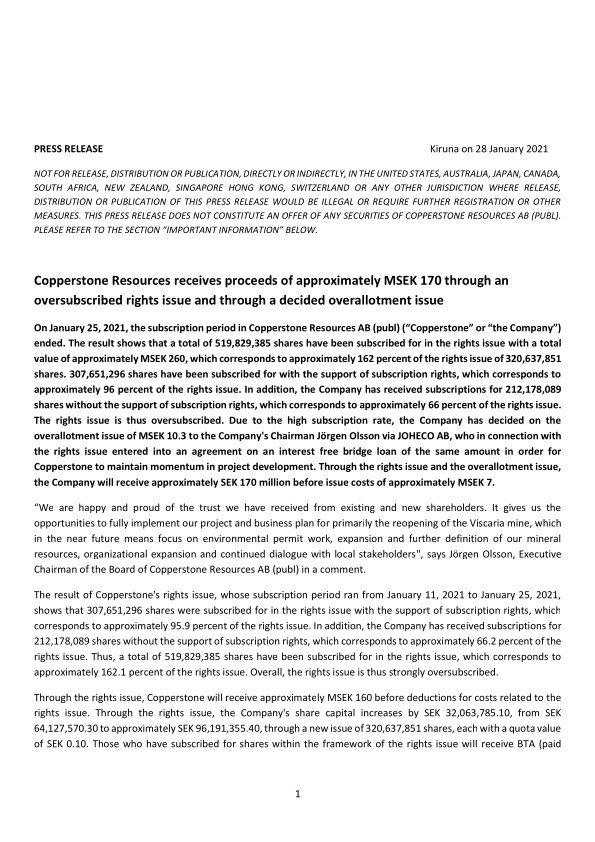