The resolutions made are presented below.

Registered office: The extraordinary general meeting resolved, in accordance with the proposal of the board of directors, to amend § 2 of the articles of association as follows:

Share capital, share class and the number of issued shares: The extraordinary general meeting resolved, in accordance with the proposal of the board of directors, to amend § 4 of the articles of association as follows:

The resolution regarding the amendment on § 4 means that the Company should only be able to have one class of shares, and thus the possibility of issuing Class A shares is abolished and the current § 11 (preferential rights in issues) and § 12 (conversion) are deleted from the articles of association

Notice: The extraordinary general meeting resolved, in accordance with the proposal of the board of directors, to amend § 7 of the articles of association as follows:

·Notice of General Meeting shall be made no earlier than 6 weeks and no later than 4 weeks before the General Meeting, however, that notice of an Extraordinary General Meeting where no change in the articles of association is to be considered may take place no earlier than 6 weeks and no later than 3 weeks before the Meeting. Notice shall be published in ‘Post- och Inrikes Tidningar’ and the notice shall be made available on the Company’s website. At the time of notice, an announcement that notice has been publish shall be announced in ‘Dagens Industri’. Shareholders who wish to participate in the negotiations at a General Meeting shall, in addition to the provisions regarding the record date and otherwise for participation stated in the Swedish Companies Act, notify their participation in the meeting to the Company in the manner specified in the notice convening the General Meeting. The latter day may not fall on a Sunday, another public holiday, Saturday, Midsummer’s Eve, Christmas Eve or New Year’s Eve, nor may it fall earlier than the fifth weekday prior to the General Meeting.

Voting by post, collection of proxy forms and possibilities to follow a general meeting: The extraordinary general meeting resolved, in accordance with the proposal of the board of directors, that § 11 of the current articles of association be deleted and replaced by the following § 11:

About Lars Seiz
Lars Seiz was born in 1960 and has a master's degree in finance and marketing from Uppsala University. He has over 30 years of experience from the financial sector with leading positions within SEB and the Second AP Fund (Sw. Andra AP-fonden). Lars also has experience from a number of board assignments and is currently a board member of, among others, Handelsbanken Fonder AB. In recent years, he has also been involved in founding a number of companies in various industries, where he currently acts as an advisor in financing and corporate affairs.
Resolution regarding the board’s proposal for issue authorisation (item 8 on the agenda)

The extraordinary general meeting resolved, in accordance with the proposal of the board of directors,   to authorise the board for the period until the next Annual General Meeting, at one or several occasions, with or without deviation from the shareholders’ preferential rights, against payment in cash or through set-off or in kind, or otherwise with conditions, to resolve on an issue of new shares, warrants and/or convertibles. The total number of issued shares, or the number of shares that may be issued upon conversion of convertibles or through exercise of warrants, may not exceed 20 per cent of the registered number of shares in the company at the time of the General Meeting’s resolution. The number of shares which may be issued upon conversion of convertibles or through exercise of warrants refers to the number of shares before a potential recalculation. The purpose of the authorisation, and the reason for the possibility to deviate from the shareholder’s preferential rights, is to enable the company to, in a promptly and cost-effective manner, procure capital, carry out acquisitions or make use of other strategic opportunities. The value transferred to the company through issues by virtue of the authorisation, shall be made on market terms and may include a market based issue discount.

The extraordinary general meeting resolved, in accordance with the board of directors’ proposal, to adjust certain conditions in warrant program 2019/2022 and 2020/2023, respectively, in order to harmonize with entered, and announced, contract terms and prior to future warrant allocations to directors or other key persons.

This information was submitted for publication, through the above contact person’s agency, 18:40 CEST on September 29, 2020.

Copperstone Resources AB (publ)
The Board of Directors

Copperstone is a public company trading as COPP B on NASDAQ First North Growh Market (Stockholm). The Certified Adviser is Augment Partners AB, info@augment.se, +46 8 505 65 172. The Company is focused on base and precious metal exploration in the vicinity of the internationally recognized mining districts of Kiruna and the Skellefte-field in northern Sweden. In addition, the Company also has interests in the Bergslagen mining region, in central Sweden. 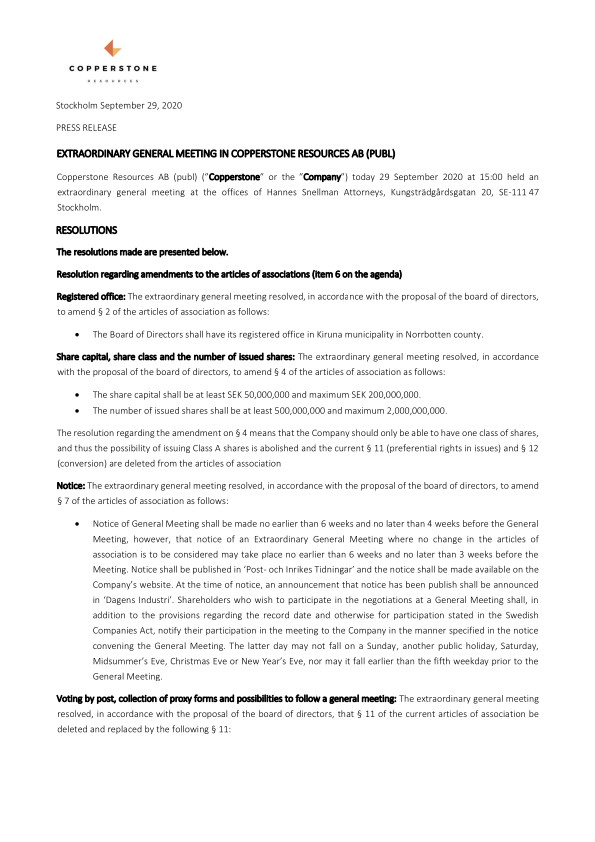