NOT FOR RELEASE, DISTRIBUTION OR PUBLICATION, DIRECTLY OR INDIRECTLY, IN THE UNITED STATES, AUSTRALIA, JAPAN, CANADA, SOUTH AFRICA, NEW ZEALAND, SINGAPORE, HONG KONG, SWITZERLAND OR ANY OTHER JURISDICTION WHERE RELEASE, DISTRIBUTION OR PUBLICATION OF THIS PRESS RELEASE WOULD BE ILLEGAL OR REQUIRE FURTHER REGISTRATION OR OTHER MEASURES. THIS PRESS RELEASE DOES NOT CONSTITUTE AN OFFER OF ANY SECURITIES OF COPPERSTONE RESOURCES AB (PUBL). PLEASE REFER TO THE SECTION “IMPORTANT INFORMATION” BELOW.

The rights issue and overallotment issue have now been registered with the Swedish Companies Registration Office (Sw. Bolagsverket) and the last day of trading in COPP BTA B will be February 17, 2021. The stop day will be February 19, 2021. Shares are estimated to be delivered to the shareholders’ accounts on February 23, 2021.

This press release is not a prospectus in the meaning of Regulation (EU) 2017/1129 (the “Prospectus Regulation”) and has not been approved by any regulatory authority in any jurisdiction. A prospectus, corresponding to an EU Growth Prospectus, has be drawn up by the Company and published on the Company’s website. 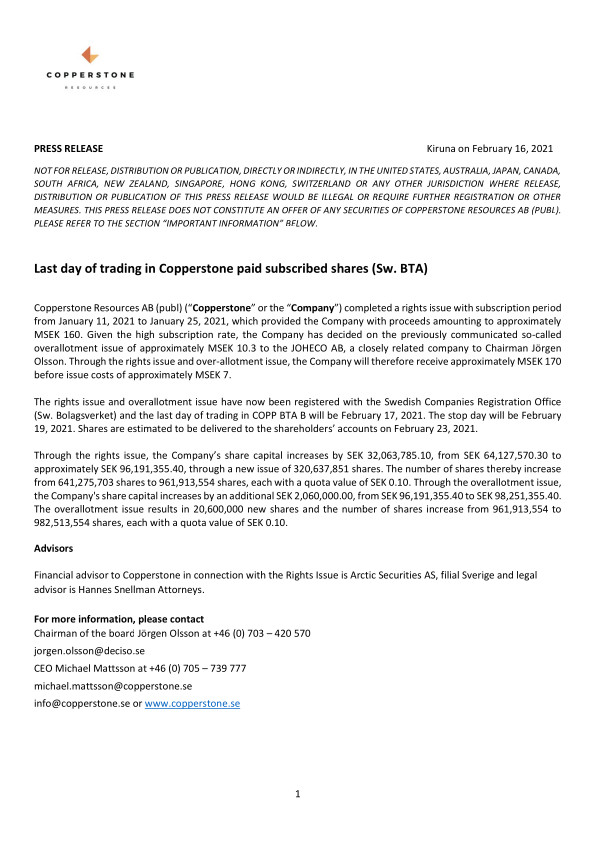