Copperstone Resources AB (“Copperstone” or “the Company”) has in the last two years carried out extensive core drillings, which has now been compiled into a mineral resource estimate according to the PERC-2017 standard. Viscaria's measured and measured & indicated mineral resources have increased by 43 percent and 23 percent, respectively, thanks to a successful conversion to a higher classification. This could secure the Viscaria mine's future production by another 3–4 years (with an annual milled volume of 3 Mton with 30,000 tons of copper in concentrate as the final product), which is intended to be verified in the continued work. In total, the Company's mineral resource has increased to 93 Mton, which corresponds to an increase of 26 percent since November 2020 and almost 80 percent since the acquisition of Viscaria in 2019. The total copper tonnage in Viscaria has increased to 817.7 Kton (excluding the existing tailings dam), which is a significant increase from 609 Ktons at the Viscaria acquisition in 2019 and 727.4 Ktons at the last mineral resource upgrade in November 2020.

“The core drillings completed over the last two years create a potential to secure the future production of the Viscaria mine by 3-4 years, which further strengthens the Viscaria project. Through more dense core drilling in Viscaria's mineralization, we have been able to raise the resource classification from inferred to measured or indicated mineral resources. Based on these results, the feasibility study can now be done with good precision and reliability," comments CEO Anna Tyni.

During 2021 and 2022, Copperstone has gradually accelerated the pace of infill and exploration drilling ahead of the reopening of the Viscaria mine in Kiruna. Since the acquisition of Viscaria in 2019, Copperstone has completed 45,051 meters of core drilling supplemented with the gathering of additional data from ground and airborne geophysical surveys, surface samples and reversed circulation (RC) drilling.

The core drillings will continue in Viscaria at an intensified pace, with 5/6 drill rigs secured after New Year, whereof 4-5 rigs will secure further life-of-mine, and 1-2 drill rigs will be devoted for near mine/district exploration outside exploitation concession areas.

The upgraded mineral resources include a so-called cut-off[1] of 0.25 percent copper in the A/B zones and 0.40 percent copper and 20 percent iron in Magnetite, respectively, in the D zone. The technical and economic factors affecting mineability (RPEEE, or reasonable prospect of eventual economic extraction) were defined in a scoping study carried out by the former owner of Viscaria, Sunstone Metals Ltd, in April 2016. It is reasonable to expect that the increase in the copper price from USD 6,000/ton to levels above USD 8,000/ton, as well as the SEK/USD exchange rate from 8 to 10, both will significantly improve the outcome of the feasibility study.

The mineral resource upgrade can be summarized as follows:

The mineral resources are reported in accordance with the guidelines in PERC 2017. They resources have been estimated and compiled for reporting by the Company's geological team, under the supervision of Mining Engineer Thomas Lindholm, GeoVista AB, who is Fellow AusIMM and a member of FAMMP and a Competent Person to report on mineral resources based on his education, experience and membership in recognized professional organisations. This mineral resource statement is supported by a completed Table 1, as required by PERC 2017.

Further details and information regarding the estimation of the mineral resources, including Table 1, will be uploaded on the Company's website www.copperstone.se.

Copperstone Resources AB is a company now scaling up to become a modern and responsibly producing mining company through the reopening of the Viscaria mine in Kiruna, Sweden. The deposit’s high copper grade assessed mineral resources, geographical location and growing team of experts provides good opportunities to become a key supplier of quality and responsibly produced copper – a metal that plays a critical role in Sweden’s and Europe’s climate change towards an electrified society. In addition to the Viscaria mine, Copperstone holds a number of other exploitation concessions and exploration permits in Arvidsjaur (Eva, Svartliden, Granliden) and Smedjebacken (Tvistbogruvan), all in Sweden. The company’s shares are traded on the Nasdaq First North Growth Market (ticker COPP B). Augment Partners is the company’s Certified Adviser, info@augment.se, +46 8 604 22 55.

[1] The so-called cut-off grade is the lowest grade that is currently deemed necessary for economic extraction. Somewhat simplified, it can be stated that grade levels above are assessed as mineral/ore and grade levels below the cut-off are assessed as waste rock. The cut-off depends on several parameters, including but not limited to, the cash cost per ton and metal prices.

This information is information that Copperstone Resources is obliged to make public pursuant to the EU Market Abuse Regulation. The information was submitted for publication, through the agency of the contact persons set out above, at 2022-11-18 07:05 CET. 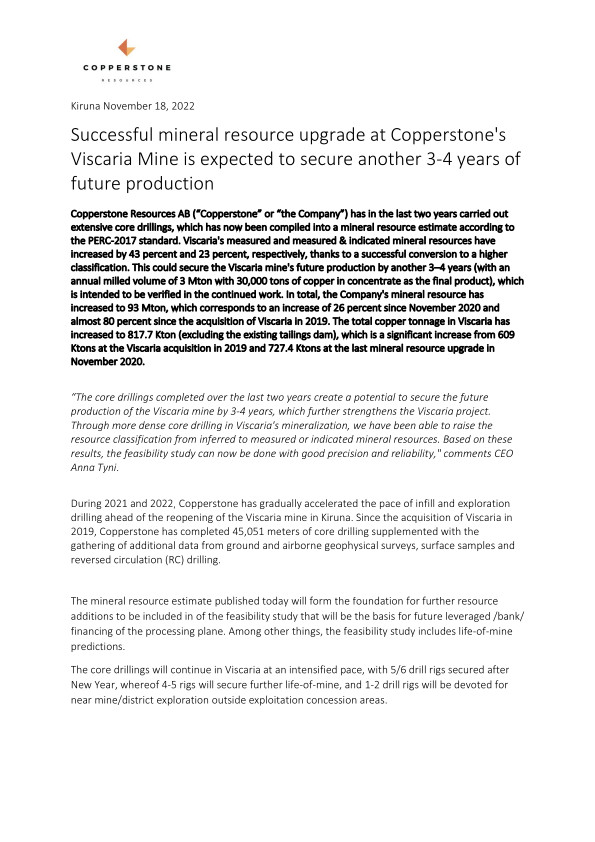