NOT FOR RELEASE, DISTRIBUTION OR PUBLICATION, DIRECTLY OR INDIRECTLY, IN THE UNITED STATES, AUSTRALIA, JAPAN, CANADA, SOUTH AFRICA, NEW ZEALAND SINGAPORE HONG KONG, SWITZERLAND OR ANY OTHER JURISDICTION WHERE RELEASE, DISTRIBUTION OR PUBLICATION OF THIS PRESS RELEASE WOULD BE ILLEGAL OR REQUIRE FURTHER REGISTRATION OR OTHER MEASURES. THIS PRESS RELEASE DOES NOT CONSTITUTE AN OFFER OF ANY SECURITIES OF COPPERSTONE RESOURCES AB (PUBL). PLEASE REFER TO THE SECTION “IMPORTANT INFORMATION” BELOW.

The board of directors of Copperstone Resources AB (publ) (“Copperstone” or the “Company”) has today, by virtue of the authorisation of the EGM of 15 December 2020, resolved upon a rights issue with preferential rights for the shareholders of Copperstone amounting to approximately MSEK 160, before deductions for transaction costs (the “Rights Issue”). Furthermore, the Company may resolve upon a so-called over-allotment issue amounting to approximately MSEK 10.3. The Rights Issue is primarily intended to finance the project development towards a reopening of the Viscaria mine in Kiruna, as well as to prepay the additional purchase price regarding the Viscaria acquisition. The resolution regarding the issue is in accordance with the press release that the Company published on 20 November 2020.

The Rights Issue in brief

Shareholders who choose not to participate in the Rights Issue will have their shareholding diluted by a maximum of approximately 33.3 per cent of the capital. However, such non-participating shareholder have a possibility to sell their subscription rights in order to receive compensation, in whole or in part, for the dilution. In the event that the above mentioned bridge loan is utilized by the Company, the bridge loan is intended to be settled by a set-off in connection with the allotment, and as a second alternative at a very high subscription rate, by a directed share issue by set-off (corresponding to a so called over-allotment issue). In such case, the total amount for the two rights issues may amount to a maximum of approximately MSEK 170. The total dilution, included the over-allotment issue, may therefore amount to a maximum of approximately 34.7 per cent.

Complete terms and conditions and instructions for the Share Issue as well as other information regarding the Company will be stated in the prospectus that will be published before the subscription period.

The information in this press release does not constitute an offer to acquire, subscribe or otherwise trade in shares, subscription rights or other securities in Copperstone. Any invitation to the persons concerned to subscribe for shares in Copperstone will only be made through the prospectus which Copperstone will publish on the Company’s website (www.copperstone.se) on or around 7 January 2021.

This press release is not a prospectus in the meaning of Regulation (EU) 2017/1129 (the “Prospectus Regulation”) and has not been approved by any regulatory authority in any jurisdiction. A prospectus, corresponding to an EU Growth Prospectus, will be drawn up by the Company and published on the Company’s website. 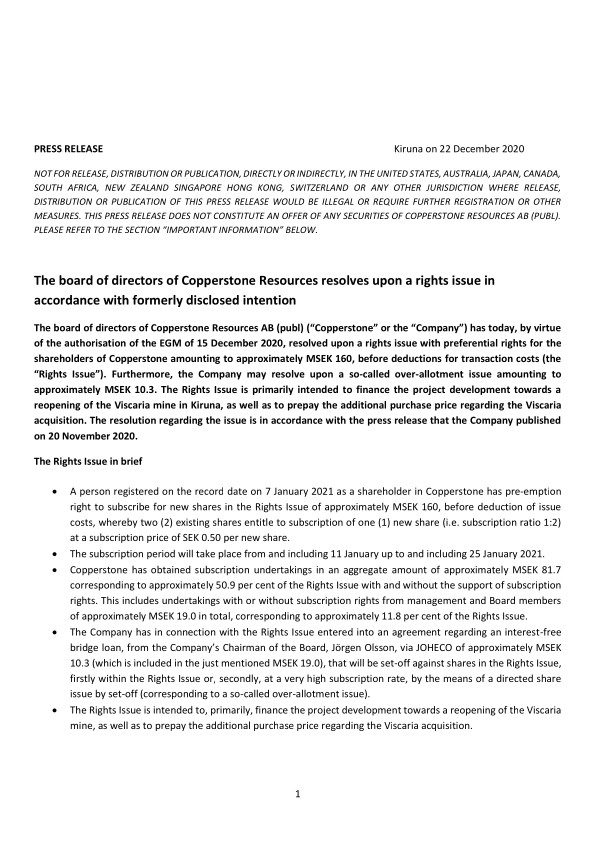