The Viscaria Copper Mine is located approximately 1,200km north of the Swedish capital Stockholm in the Kiruna region, which is regarded as a world-class mining province. The Viscaria Project area is located approximately 5km west of the town of Kiruna. It is close to major infrastructure, including the E10 highway, the Luleå-Kiruna-Narvik railway, and the established hydro-power grid.

Historically, the Viscaria Copper Project produced 12.5 Mton of ore at 2.3% copper and has excellent potential to become a producing mine again.

Kiruna is home to the world’s largest underground iron ore mine called Kirunavaara that is operated by LKAB (owned by the Swedish Government).  Kirunavaara has been in production since 1899 and has already produced more than a billion tons of magnetite.

The Viscaria Project is divided into three deposits: A Zone, B Zone and D Zone. A Zone is a copper-rich deposit with minor concentrations of zinc and gold that was mined by Outokumpu OYJ between 1983 and 1997. Development consisted of underground mining utilising sub-level stoping methods. A total of 12.5 Mton of ore with an average diluted grade of 2.3% copper was produced during this time. The A Zone mineralisation has been interpreted as being a Volcanogenic Massive Sulphide (VMS) style deposit.

B Zone is interpreted to be a second lens of the A Zone mineralisation. Some very minor material was mined from one level of B Zone during the Outokumpu period with access via a development drive from the A Zone underground development.

D Zone is a copper and iron deposit and although directly adjacent to A Zone and B Zone, has a different mineralisation style. It has previously been interpreted as an IOCG style deposit, or a VMS deposit. D Zone has not been mined.

The established PERC 2017 compliant Mineral Resource Estimates for the Viscaria Project are shown in the table below. 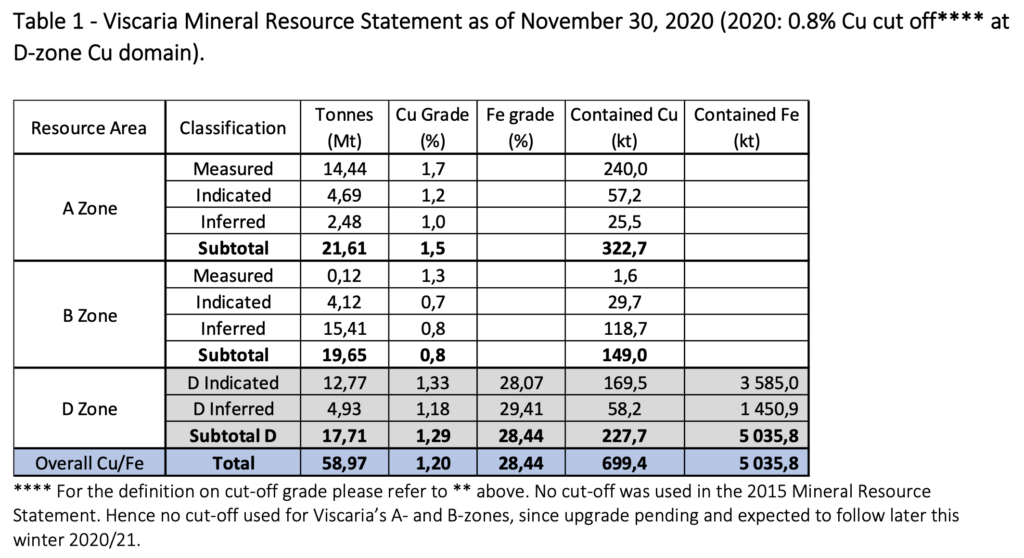