NOT FOR RELEASE, DISTRIBUTION OR PUBLICATION, DIRECTLY OR INDIRECTLY, IN THE UNITED STATES, AUSTRALIA, JAPAN, CANADA, SOUTH AFRICA, NEW ZEALAND SINGAPORE HONG KONG, SWITZERLAND OR ANY OTHER JURISDICTION WHERE RELEASE, DISTRIBUTION OR PUBLICATION OF THIS PRESS RELEASE WOULD BE ILLEGAL OR REQUIRE FURTHER REGISTRATION OR OTHER MEASURES. THIS PRESS RELEASE DOES NOT CONSTITUTE AN OFFER OF ANY SECURITIES OF COPPERSTONE RESOURCES AB (PUBL). PLEASE REFER TO THE SECTION “IMPORTANT INFORMATION” BELOW.

Copperstone Resources AB (publ) (“Copperstone” or the “Company”) publishes today a prospectus in connection with the rights issue that the Company carries out with subscription period 11 January up to and including 25 January 2021. The board of directors announced on 20 November 2020 to carry out of a new issue of shares with preferential rights for Copperstone’s shareholders amounting to approximately MSEK 160 before deductions for transaction costs (the “Rights Issue”). Furthermore, the Company may resolve upon a so-called over-allotment issue amounting to approximately MSEK 10.3.

For complete information on the Rights Issue, refer to the prospectus that has been prepared by Copperstone as well as approved and registered by the Swedish Financial Supervisory Authority as of today. The prospectus is available on  Copperstone’s website (www.copperstone.se) and Arctic Securities’ website (www.arctic.com/secse). Directly registered shareholders will be sent information folder and pre-printed issue reports. Nominee registered shareholders will be sent an information folder.

Due to the present Rights Issue, the Company has invited to a digital investor meeting on January 14 2021 at 12:00-13-00 CET. For more information, see separate press release published on January 4 2021. Register your participation to events@arctic.com by Monday January 11 2021.

Time plan for the Rights Issue

Copperstone Resources AB is a mineral exploration company formed in 2006. During 2019, the Company acquired Viscaria deposit in Kiruna and accordingly, the Company’s strategy was revised. The goal is to become a modern and responsible producing mining company through the reopening of the Viscaria mine. The deposit’s high level of copper and the geographical location provide for good conditions to become a key supplier of qualitative and responsible produced copper to customers who are driving the global change towards an electrified society. In addition to the Viscaria mine, Copperstone has several Exploitation Concessions and Exploration Permits in Arvidsjaur (Eva, Svartliden, Granliden) and Smedjebacken (Tvistbogruvan), all of which are located in Sweden. The Company’s shares are subject trading on Nasdaq First North Growth Market (ticker COPP B). The Certified Adviser is Augment Partners AB, info@augment.se, +46 8 505 65 172..

This press release is not a prospectus in the meaning of Regulation (EU) 2017/1129 (the “Prospectus Regulation”) and has not been approved by any regulatory authority in any jurisdiction. A prospectus, corresponding to an EU Growth Prospectus, will be drawn up by the Company and published on the Company’s website. 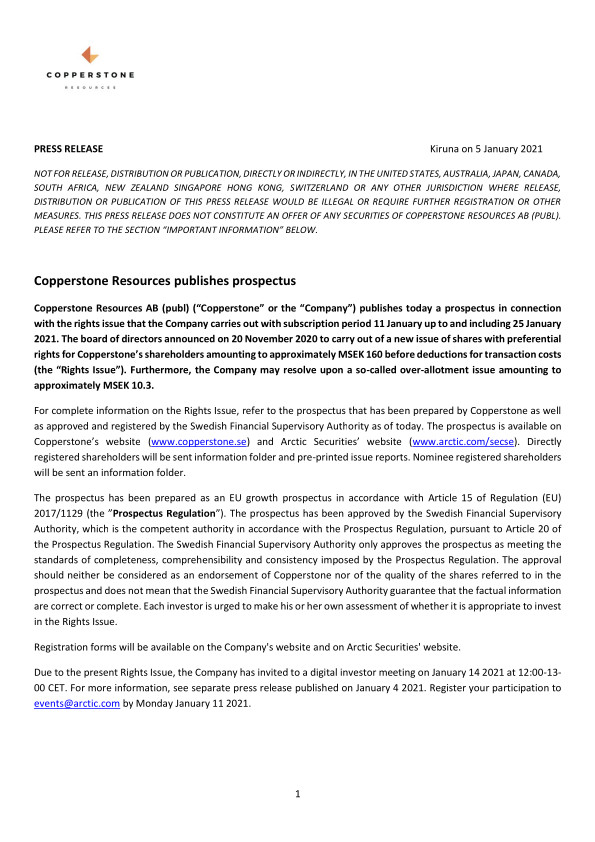